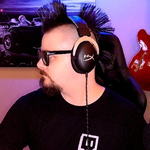 Hi! I am Anton, I am a gamer, streamer and studio producer from Norway. I have been playing video games since I was little. I started out playing Rick Dangerous on the C64, then Mario Bros on the NES, then later moved over to playing games like Alone In The Dark on the computers and then Tony Hawk Pro Skaters on the playstations. Also can mention games like Doom, Unreal Tournament, Quake, CS, WOW, +++ Those are just a few mentions of games I grew up playing. Now days I mostly play FPS and Battle Royales Like COD or Realm Royale on the Playstaion or the PC but also like other types of games.

When I am not streaming or playing video games I mostly spend my time playing and recording music or hanging with family and doing ordinary daily life stuff.

Go drop me a follow on twitch, turn that notification bell on and come by and hang and chat it up when I am live!

Ant0nOne registered on Stream Booster over 2 years ago. Was online just now.

This table shows the owners of the Twitch channels that Ant0nOne follows on Stream Booster.

Here are some of the recent games that Ant0nOne broadcasts on Twitch.